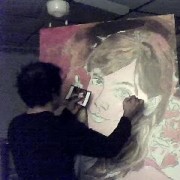 The fall of the Roman Empire in the 5th century AD saw the decline of the culture of ancient Rome. Papyrus became difficult to obtain due to lack of contact with Egypt, and parchment, which had been used for centuries, became the main writing material.

Parchment is a material made from processed animal skin and used—mainly in the past—for writing on. Parchment is most commonly made of calfskin, sheepskin, or goatskin.

It was historically used for writing documents, notes, or the pages of a book. Parchment is limed, scraped and dried under tension. It is not tanned, and is thus different from leather.

The Codex Amiatinus anachronistically depicts the Biblical Ezra with the kind of books used in the 8th Century AD.